The press coverage of the 26th March march is depressingly predictable.

The time that I worked out that the March for the Alternative might be quite big was when I went into the Hobbycraft shop to buy a bit of display board for a placard.
Stafford Hobbycraft is not exactly what you would regard as a hot bed of radical action. People go there for beads and feathers and paint. I mentioned to the lady at the till that I was planning a poster for the protest march, and she surprised me by saying there had been lots of people coming in for ribbons for the protest.
As our small coach hit the motorway it was pretty clear that we were playing tag with dozens of coaches all heading in the same direction, union groups, from Wolverhampton, Pensioners groups, librarians, Sure Start.
The queue for the loos when we stopped at the service station were impossibly full of middle aged women like myself. No point queuing not enough time to avoid holding up the coach.
Virtually all the people I spoke to on the coach had in common that they had not been on a protest march since the 1980s. One mature lady who worked for a PCT and was waiting to see if she would be transferred to one of the new GP consortiums told me that her 6 year old granddaughter had shamed her into coming onto the march.
Wembley coach park was already packed by the time we got there and in central London the march was well underway, so we assembled our banners and crammed into the tube, with an assortment of strangers all bound in the same direction. 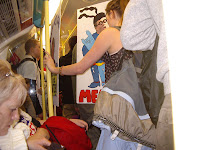