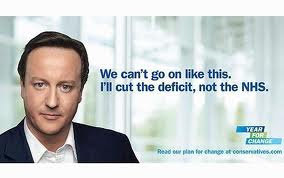 When I heard Andrew Lansley’s complaint that Labours stance on the NHS was political opportunism, I almost dropped my cornflakes.

His concern may be a sign that the reality of being in government is coming home. The press is a ready-made tool for demolition. It is much harder to use it effectively as a tool to explain your plans and persuade people to like them.
Andrew Lansley is struggling to get us to like his plans. Most people still have little idea of what is proposed, and many of those that do know are giving clear indications that they do not like what is on offer. For my own part, I would like to see the process slowed right down, give Mr Lansley the time to get his points across with much greater clarity, and give him a chance to listen effectively to well informed public response to these proposals.

For Mr Lansley to make the assumption that the resistance to his plans is coming chiefly from Labour would I think be a serious mistake. What I am seeing as a labour party activist are many people who are concerned that Labour is not being nearly strong enough in its opposition to the plans. If it is opportunism to represent people, in the confusion and anger that so many people feel about these plans, then yes this is political opportunism.

My shock at hearing the words "political opportunism" from Mr Lansley springs from the fact that I live in Stafford, where we have spent the last two years finding out just what it feels like to be one of Mr Lansley's political opportunities. Perhaps this needs a little explanation.

What the world in general “knows” about Stafford is that it is the town where hundreds of people died because of poor care at the hospital. My understanding from three years of close and well informed observation of what has actually happened here is rather different.

I see a hospital that certainly has had its share of problems. Problems which are now being microscopically examined by the fifth major investigation in three years. I see this within the context of an NHS which has real and growing challenges to meet, as expectations rise, and our life expectancy continues to increase at a very rapid rate.

I also saw in Stafford a completely unique set of circumstances:
• There was a statistical system that was vulnerable to bad data, and there was bad data to invalidate its findings.
• There was an impenetrable statistical row between different sets of statisticians. Something that the press, public and politicians all struggled to understand.
• There was a forceful lady fired with the energy and anger that can only come from a difficult bereavement.
• There was a political party with an election they were determined to win, and some questionable methods of going about this.
• There was a need for the Conservative party to prove that they cared about the NHS.
• There was Andrew Lansley with his mission to change the NHS and a burning need to demonstrate that it needed changing.
• There was the media fired up by finding themselves at the centre of a cracking good story.
• And there were lawyers, lots and lots of lawyers, with an opportunity to ply their trade.


The reason why the Stafford Hospital story became a global media scandal, and persisted beyond a few days was quite simple. It was because of the claim that 400-1200 people had died as a result of poor care.

This information was credited by press and media to the healthcare commission report. I find it is still a considerable shock to people when I say “this is not actually true”. The report does not either say or imply these numbers. It makes no attempt to quantify the number of people who may have died as a result of poor care.

I cannot give you the precise source of these numbers, because they are now being attributed to a document that most members of the general public, including myself, have never seen. We do know this unpublished material was left out of the Healthcare commission report, because it was considered that it was not well based and that the public would misunderstand it. We do also know that the writer of this deleted report has made it plain that his numbers cannot be used for the purpose to which the press have repeatedly used them.

All this is public knowledge, but despite a huge amount of effort on my part it still seems impossible to quash the use of these figures. Some papers have now stopped using the figures, some have even printed a low visibility paragraph showing that they got the attribution wrong, no one has yet published the very prominent correction that is needed.

In my dealings with the press they always come back with the question “well how many people did die of poor care then?” which is a question that does not and probably never will have an answer. There is however a steadily growing body of evidence, supported by pretty well all the testimony to the public Inquiry,that there was nothing particularly unusual about the level of mortality at Stafford.

The factual errors that have been made in the reporting by Press and Media are both complex and serious. These errors, and the disproportionate reporting that has resulted from them are now the subject of a complaint to the press complaints commission and the BBC. (see clips below for a snap shot of the reporting of this case.)

Is anyone to blame for all this? I really do not know. There is a magic mirror where people see what they most desire to see. For me the Stafford Hospital story has something of this quality. So many people are involved, each one sees something different. In the centre of all this the patient figure of Robert Francis, trying to find a view point which is true and will satisfy the key players in the story.

I did blame Bill Cash, because I believed that he had deliberately manipulated the media, and that he had understood the material he was dealing with. After his evidence to the Inquiry I now know that I was wrong. If he is to blame, it is for failing to ask questions that he should have asked, and for speaking with apparent authority on a subject where he understood so very little.

Do I blame Andrew Lansley? Yes. At this moment I think I do.
Andrew Lansley would say of himself that he is the man who understands the health service best. It is his responsibility to understand the systems that he is now in the process of destroying, and that means he should have had a firm grasp of the detail.
Lending his authority and leading the public into believing that a massive failure of the NHS had taken place in an individual hospital, would, unless there was the clearest possible evidence that this was the case, be seen by many as an irresponsible act.

So when I think of political opportunism and the NHS, the images that spring to my mind are mostly of Andrew Lansley and some of his colleagues.
The fading photographs in my pile of press cuttings show him at the entrance to the hospital, Inside the Café headquarters of the pressure group, in the commons, on the green at Westminster, Bringing David Cameron into the centre of the picture, specifically leading public opinion to reject the “independent Public Inquiry, before it had even begun to sit, because he did not want to draw a line under this case before the 2010 election, On the party conference stage with the pressure group as one of his star turns, and on the politics show this month using the public perception of MidStaffs to justify his decision to scrap the primary care trusts, and to shore up the NHS reforms against a gathering tide of widespread opposition.

Political opportunism is perhaps something that too many politicians are guilty of. What I have seen in the complex interaction between the press, the pressure group and the political party in the case of Stafford Hospital is a kind of cleverly managed emotive opportunism that has shocked me deeply.
It is something that in the short term may have put enough votes in the right box to help tip the balance on the election of 2010, but the end result is that it damages our trust in both the press and the politicians caught up in this story.
It is the reason why I am actively campaigning now for reform of the press. We need good journalists who make their reputations by searching for the truth, and we need effective ways of challenging the press when they get it wrong. We also need a press that will also permit politicians to get their points across in an transparent and straightforward way.

So Mr Lansley, if you are thinking of using the words “political opportunism” in the future, I really could not advise you to go there.


Here is a tiny selection of some of the reporting of the Stafford Hospital Story.