The irony, nay hypocrisy, of Paul Dacre''s triumphant whoops of joy was not lost on most of those who saw the Daily Mail's headline this morning: 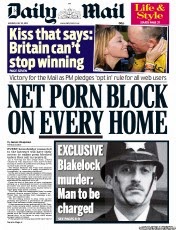 What was it which drew so many loud guffaws? This:- 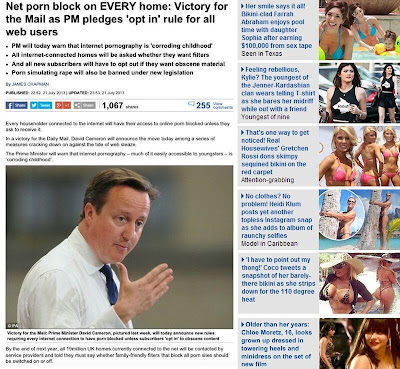 Is Paul Dacre really welcoming a move to block his daily 'Sidebar of Shame'?

We await a comment from Express' and Star's owner, Richard Desmond, with baited breath..... and a foul-language filter!

Posted by Rosie Robertson at 13:59

On the 19th of July, 2011, Rupert Murdoch told the Culture Media and Sport Parliamentary Select Committee that that day was 'the most humble day of my life'. Not an altogether convincing performance, but unforgettable all the same:

Tonight, Channel 4 News' Andy Davies, in conjunction with the investigative team at Exaro

Earlier this year, in a meeting with a group of Sun journalists (most of whom had been arrested by police for allegedly paying public officials, some of them police officers, for information), Rupert Murdoch had been secretly recorded by one of those present.

The full story can be read on the Channel 4 News website, including a video clip of MP Tom Watson and media commenter Steve Hewlett discussing the revelations with Jon Snow.

What we hear gives the lie to the 'humble' description Rupert Murdoch gave of himself and shows his true attitude towards the police and the misdemeanours of which his journalists have been accused.

Further coverage of tonight's events can be found by clicking the links below:

As Tom Watson told Jon Snow, it is to be hoped that the audio recording and transcript are immediately passed to the police!


The investigation of News Corp is not, as Murdoch claims, about "paying cops for news tips": it is about systemic corruption. The deputy assistant commissioner of the Metropolitan police at the time, Sue Akers, explained early last year: "The cases we are investigating are not ones involving the odd drink, or meal, to police officers or other public officials. Instead, these are cases in which arrests have been made involving the delivery of regular, frequent and sometimes significant sums of money to small numbers of public officials by journalists."

One of the decisive moments consolidating Murdoch's relationship to the Metropolitan police was the use of police as armed strikebreakers in the 86-87 Wapping dispute. Margaret Thatcher herself had assured Murdoch that the police would be at his disposal, and their collusion in breaking the strike required an operation costing £14m.
As the Guardian journalist Nick Davies pointed out, this was never simply a matter of criminality. It was always about power. The networks of collusion, bribery and complicity that began to be established in the Thatcher era are beginning to be unravelled.

Posted by Rosie Robertson at 01:27

Look behind you, Mr. Kavanagh!

This morning's edition of The Sun carries the latest volley in its unremitting personal onslaught against Lord Justice Leveson as well as the ongoing process of negotiation towards a workable system of press regulation.

Trevor Kavanagh's piece follows hot on the heels of one written in a similar vein in the Mail on Sunday this weekend.

Mr. Kavanagh, in a typically hyperbolic and disingenuous tone, begins:

Do these 'close pals' actually exist? Would they really confide in the editor of a paper owned by Rupert Murdoch, the man partly responsible (allegedly) for the need for the Leveson Inquiry in the first place?

The article goes on to repeat several instances (thrice denied by Lord Justice Leveson himself) of perceived impropriety and incompetence which have been used by various newspapers recently to disparage Lord Justice Leveson, his report and the credibility of the Inquiry as a whole.

But I have a warning for Mr. Kavanagh and the other editors and owners of the press who are trying to manipulate politicians, as well as their readers, into accepting the status quo of press regulation:-

To continue your panto theme: it was owners, editors and journalists who rubbed the lamp and allowed the genie to escape.

No amount of fruitless, Widow Twankey-like huffing and puffing will stuff it back from whence it came! It's out for good.....

Posted by Rosie Robertson at 11:27