'They come over here and nick all our houses!' - Really?


Today's Sunday Express takes a break from gloomy weather portents (for once, right this week!) or contradictory reports on the beneficial/harmful effects of statins to return to an old favourite topic - immigrants. 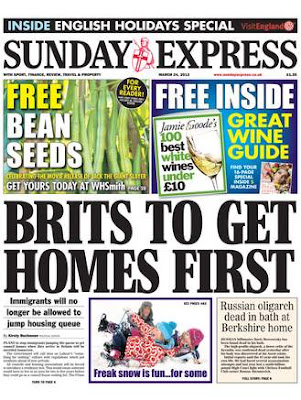 These headlines presage a speech to be given by David Cameron on Monday when he will reassure the nation that no longer will newcomers to our country be able to jump the social housing queue.

The Mail on Sunday also flags up the PM's speech:

But just how much truth is there in the story that immigrants get preferential treatment by councils when housing is allocated?

From what I can find out, not much - if any! 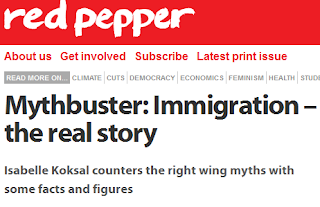 The Express and other tabloids have long been exaggerating the impact of the immigrant population on public services housing, jobs and welfare: 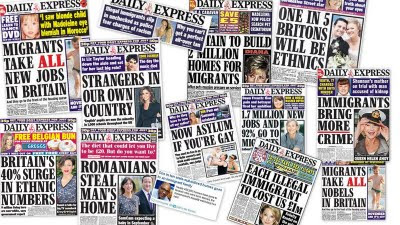 A visit to the Full Fact website and a quick search under 'immigrants' takes you to a far more well-informed source of the truth!

The leaders of all three major political parties are vying with each other to appear tough on immigration. This is partly because of the apparent surge in popularity of UKIP who never flinch in their attacks on the EU or immigration.
An example of UKIP's propaganda:


That 29 million is more than the combined populations of both countries!

Are our politicians, in their eagerness to impress potential voters by introducing stricter curbs on the rights (or perceived rights) of people wanting to settle in the UK, not in grave danger of merely fuelling false impressions, encouraging ever greater division and hatred?

There are other voices being raised, however:
Immigration Fears are Being Stoked by Politicians, Says Bishop - Observer

Posted by Rosie Robertson at 01:32

Sticks and stones may hurt my bones, but words ..?

I watched every minute of every day of the Leveson Inquiry into the ethics of the press.

I listened to evidence from politicians, journalists - national and regional - editors, owners of papers, union members and leaders, photographers, representatives of the Police service and Justice systems, people from fact-checking internet sites, celebrities and ordinary men and women from all strata of society.

Some of the testimonies I heard made me angry, sceptical or downright suspicious.

Occasionally, I was very impressed by the obvious honesty and integrity many of the participants showed; at times I was utterly repelled by the arrogance, carelessness and refusal of the few to co-operate with the process.

One group of witnesses reduced me to tears.

This group was made up of people who have always been the subject of tabloid (usually, but not exclusively) articles deliberately written in such a sensationalist way as to appeal to the baser emotions of hatred, contempt or revulsion of their readers.

One particular group of people is supported by Trans Media Watch and their website can be found HERE.

The evidence Trans Media Watch gave at the Leveson Inquiry was for me at once upsetting, moving and compelling - but was barely covered by the press or wider media. This is a transcript of the evidence they gave.
This submission gives details of many of the articles found in the tabloid press and the terrible impact on people involved.

There is a section in the document which describes the response, or lack of response, of the press regulator, the Press Complaints Commission.

Two days ago, a transgender teacher was found dead in her home. She is reported to have taken her own life. Some details have been reported in the New Statesman.

On December 20th last year, Richard Littlejohn got wind of this story and wrote an article about the teacher in the Mail. The article, after the news of the teacher's death broke today, has been altered to remove reference to the teacher by name. Too late.

The reasons for someone taking their own life are always complicated and I in no way suggest that Mr Littlejohn's words encouraged this woman to end hers, indeed there is no certainty at this stage as to how she died - but to have her private life exposed in that way and held up for public comment and disapproval cannot have helped her at an extraordinarily difficult time.

We have this past week witnessed the unedifying spectacle of the battle raging between elements of the UK national press, desperate to retain free rein to print whatever they like, and those who believe that tighter regulation of the behaviour of the papers is needed.

Is the case of Lucy Meadows further evidence that the recently agreed draft Royal Charter is the answer?

The Leveson Inquiry was not set up solely to deal with the outrageous phone-hacking scandal (phone-hacking is illegal anyway) but also to identify why phone-hacking went unreported, uninvestigated for so long. Lord Justice Leveson's remit also covered the ethics of the press and why the Press Complaints Commission seemed so inept at ensuring the privacy, reputation and human rights of individuals Like Lucy Meadows were kept sacrosanct.

The voices of many so regularly brutally used by certain newspapers and 'journalists' like Littlejohn to sell copies still go unheeded.

The Death of Lucy Meadows - Jack of Kent

The Sun is incandescent....

Showing its disapproval of the budget speech delivered today by Chancellor George Osborne, The Sun left its readers in no doubt that they would gain cold comfort from the Treasury for the near future!

Do those same readers, however, understand the barbed comment behind the 'Budget Coverage as Approved by the Ministry of Truth' banner?

Ostensibly, those words mean that The Sun's details are completely accurate, whereas those watching carefully the behaviour of the papers since the apparently unfavourable Commons vote on Monday on regulation of the press, will be aware of a deeper, more vengeful sentiment.

On the 18th of March, The Sun's readers were treated to a very impressive, but startlingly hyperbolic image and quotation from Winston Churchill:- 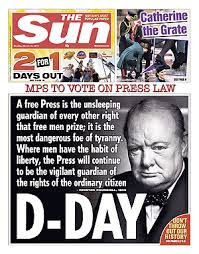 The overt warning appeared on the very night when the cross-party group of politicians met in a last-ditch attempt to settle on a system of press regulation. It was accompanied by this article.

Tomorrow, many of the nationals, except for the Daily Express and the Mail, carry very strong front pages too (they can be seen on the left of this #pressreform page) although none have elicited such shock from many Twitter users as that from The Sun:- 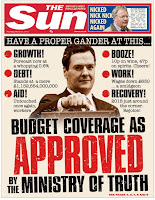 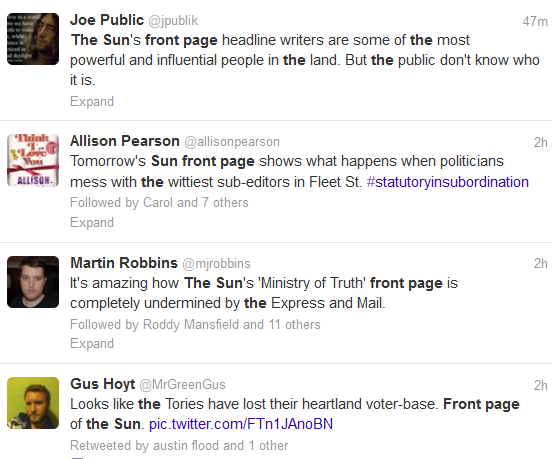 It looks as though all MPs will need to watch their backs from now on.....except perhaps Michael Gove and those few Tory MPs who voted against the Royal Charter!
Posted by Rosie Robertson at 01:21

Geoff Webster, Deputy Editor of The Sun has today been charged with allegedly signing off on payments by journalists at the paper to public officials in exchange for information.

Posted by Rosie Robertson at 12:18

Reports began to surface last night in the media of a surprising development which could make life difficult for Rupert Murdoch and News International, David Cameron in Monday's Commons debate on press regulation and the industry itself.
From the Guardian:-

This new bombshell landed soon after it became known that, following the arrest and questioning of four serving and former editors at the Sunday Mirror on Friday, a former Daily Mirror Editor, Richard Wallace had been questioned under caution.
From the Guardian: 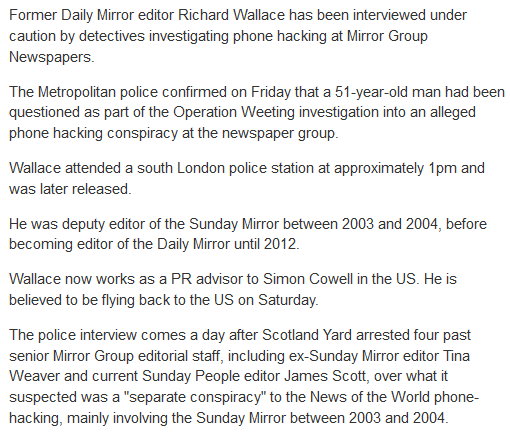 From the Mail Online: 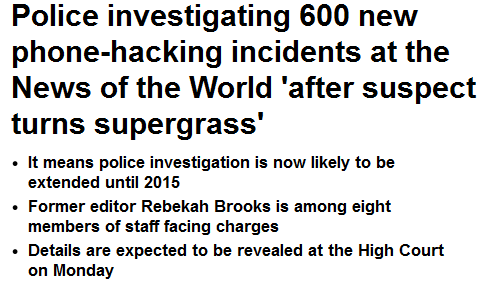 The Sunday papers will, no doubt, be full of the work of journalists desperate to make their case before the politicians debate and vote for a system of press regulation favourable to them.

Will the papers resort to smears against MPs, hoping to sway their votes?
Will they try to paint Hacked Off as a bunch of underhand, unscrupulous schemers out for revenge?

It will be fascinating to see which strategies they choose in a final push to preserve what they see as 'Press freedom'.....
Posted by Rosie Robertson at 00:41

Tweaking the tails of Mail and Sun has consequences...

Yesterday David Cameron put an abrupt end to cross-party talks to resolve differences over the form press regulation should take after the Leveson Inquiry Report. The decision will now be determined by votes on amendments made in a Parliamentary debate on Monday next, 18th March.
Cameron's decision has come as a surprise to many who thought that an agreement was close :-

Over the past few months, since the Leveson Report was published and attention turned to David Cameron who would make the ultimate decision about whether to adopt the recommendations or not, there has been a cacophony of dire warnings about the consequences of bringing in new draconian measures to curb the 'free press'.

The most stentorian, hyperbolic voices raised have been from the right-wing press - both 'quality' and tabloid. Countless articles written, opinions solicited and heard on TV screens - most with dire warnings of what would happen to investigative journalism in particular should Parliament plump for 'state regulation' of the press. ('State regulation' of the press is not on the cards, in any case!)

David Cameron himself has become a target for the more mischievous, some would say unprincipled, journalists who write increasingly dark pieces about 'stalking-horses' and 'leadership bids'. Designed no doubt to rattle the PM and show him in no uncertain way that their support for him and his leadership is dependent on the decision he makes about press regulation!
Boris Johnson Fails to Rule Out Future Leadership Bid - Telegraph
Cameron Dismisses Talk of Theresa May's Leadership Challenge as 'All Rubbish - Mail Online
David Cameron In Peril as Discontent in Tory Ranks Rises - Telegraph
Theresa May Unveils Her Manifesto For Party's Future - The Sun

These 'rumours' and cleverly targeted insinuations have not escaped the notice of the PM himself - from HuffPo:-

Then, following yesterday's sudden withdrawal from talks by Cameron, came this:- 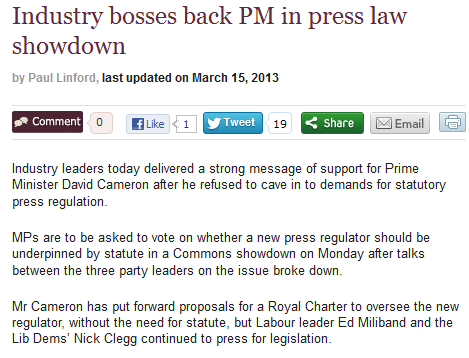 Today, the Daily Mail has reset its sights and Ed Miliband and Hacked Off are now in its crosshairs:

A reply from Hacked Off is reproduced HERE by the Inforrm Blog.


Earlier this week, this knocking-copy appeared in the Sun:- 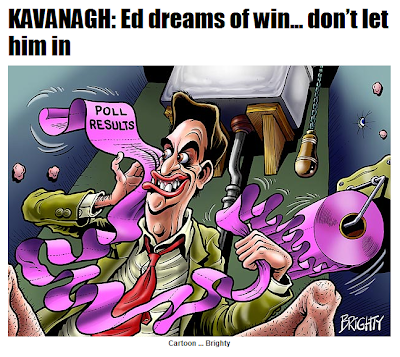 Past examples of the way newspapers can deliberately smear opponents in an attempt to sway public opinion or influence policy are given here:
News International Have Issued EIGHT Corrections to Stories About Gordon Brown in Just Six Months - Labourlist

It will be fascinating to watch the headlines this weekend - especially in the Sundays!
Posted by Rosie Robertson at 14:02