*Dan Evans finished giving his evidence yesterday, having pleaded guilty to phone-hacking last September. His plea was only announced to the court on Monday owing to reporting restrictions being in place. He is due to be cross-examined by Andy Coulson's defence team today.

Extract from Martin Hickman's report for Hacked Off:


Introducing the witness, Andrew Edis, prosecuting, told the jury that Evans had pleaded guilty to two counts of conspiracy to intercept communications; the first at the Sunday Mirror between 28 February 2003 and 1 January 2005, and the second at the News of the World between 30 April 2004 and 1 June 2010.
He had also admitted a charge of intending to pervert the course of justice by giving a false witness statement to the High Court in a civil hacking case brought by Kelly Hoppen between 21 September 2009 and 30 April 2010.
After pleading guilty to the charges, Evans had “entered into an agreement” with the Crown Prosecution Service to give evidence in the current hacking trial, Mr Edis said.

Explanation of Section 71 of  SOCPA 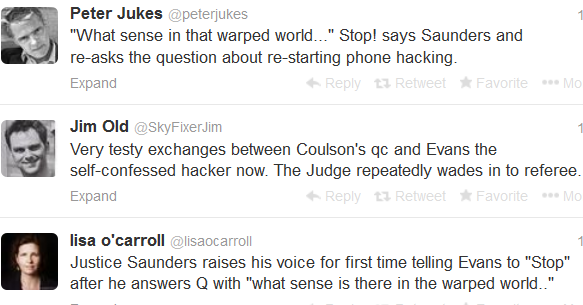 Posted by Rosie Robertson at 00:01