He argues that the lies promulgated by the force in the aftermath of the tragedy in which 96 Liverpool fans were killed prompted him to publish a front page headlined "The Truth".
Writing in tomorrow's issue of The Spectator, the former Sun editor speaks out for the first time in detail about his fateful decision to use the headline. It led to him suffering, he writes, "personal vilification for decades".
MacKenzie reveals that it was necessary to have his house patrolled by police and that he has faces physical danger should he enter the city of Liverpool. - Guardian


Writing in tomorrow’s Spectator, the former Sun editor speaks out for the first time in detail about his fateful decision to print the now infamous ‘THE TRUTH’ headline in the red-top the day after the Hillsborough disaster in 1989.
The terms of the apology and any compensation are to be debated, but MacKenzie tells of police patrols being increased around his house and the physical danger he faces in the city of Liverpool.
Kelvin admits that he was wrong, ‘but the people who have got away scot-free are South Yorkshire Police.’ He is seeking recompense for ‘the lies their officers told’.


Now I know — you know, we all know — that the fans were right. But it took 23 years, two inquiries, one inquest and research into  400,000 documents, many of which were kept secret under the 30-year no-publication rule, to discover there was a vast cover-up by South Yorkshire Police about the disaster. Where does that leave me?

He also suggests that other publications ran the same “copper-bottomed” story but The Sun was only one singled out:

Liverpool fans didn’t turn on other media, only the Sun. That has always puzzled me. Was it picked out because the paper had always backed Thatcher, while the city had always been pro-Labour? - PressGazette

A South Yorkshire Police spokesman said the force "awaits Mr MacKenzie's letter with interest".
"It is well known that many media outlets ran similar stories at the time based on the same sources but chose to treat them differently," he said.
"Mr MacKenzie was responsible for the particular headline he chose to run with." - BBC News

Posted by Rosie Robertson at 14:15


In a separate case, Mrs Brooks, 44, from Churchill in Oxfordshire - along with her husband, Charlie, and five others - are accused of perverting the course of justice and are appearing at the Old Bailey.
The charges relate to an alleged attempt to hide evidence from police investigating phone-hacking claims and illegal payments to public officials by the News of the World and the Sun.
Mrs Brooks's chauffeur Paul Edwards, former personal assistant Cheryl Carter, head of security at News International Mark Hanna, and security staff Daryl Jorsling and Lee Sandell also face the charges. - BBC News

Mr. Coulson was ordered to appear in court on Wednesday for preliminary hearings into charges that he conspired to intercept voice mail. Mr. Cameron hired Mr. Coulson before he became prime minister but kept him on as communications chief after the Conservative victory in the 2010 election.
As the hacking scandal widened, Mr. Cameron initially stood by Mr. Coulson, but disclosures about illicit phone intercepts continued. Mr. Coulson resigned from his government post in January 2011, saying the scandal was distracting him from his work at 10 Downing Street. - New York Times

(Article includes pictures of all of those appearing in court this morning.)

Posted by Rosie Robertson at 12:01


Background articles/information on this story can be found here :
Further links to related articles in media today:

Posted by Rosie Robertson at 11:32

Exclusive: News of the World hired detective firm linked with murder to spy on Met Chief

Revealed: Yard had undercover officer inside Southern Investigations for 9 years. Derek Haslam claims police failed to act on his intelligence

Youtube recording of Haslam and Hurst phone-call : Via i Trace UK ‏@iTraceUK


An article on Alex Marunchak HERE - from Brown Moses Blog.

The background to the Daniel Morgan Murder and potential links to today's revelations, from Brown Moses Blog,  HERE . 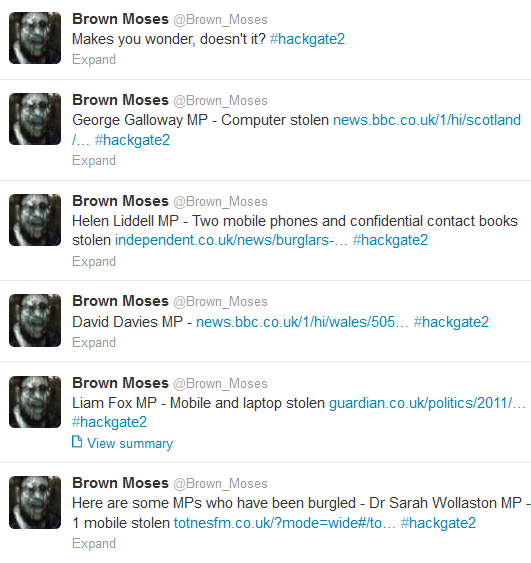 Posted by Rosie Robertson at 14:04

Express extracts an old favourite from its limited repertoire... 'furriners'! 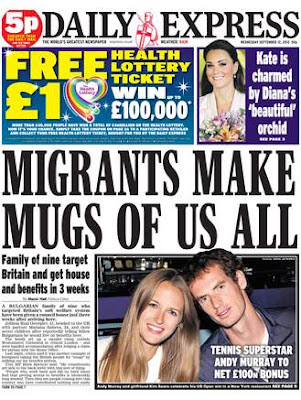 On September 12th, the Express returned to one of its favourite dog-whistle topics, guaranteed to boost sales amongst those readers who are prepared to ignore accurate statistics and are willing, all too willing, sadly, to come to heel obediently. Here , journalist Macer Hall spins a carefully worded, detailed web of hyperbole and downright untruths!

Quoting from several Tory MPs, councillors and a representative of the ubiquitous and inevitable Taxpayers' Alliance, Macer paints a lurid picture of councils overrun by huge non-British families sucking dry the small amount of cash allotted for housing the needy.

The usual cant, divisive and dangerous. 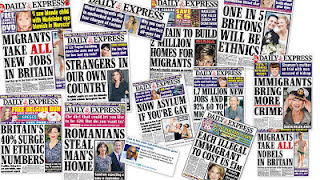 One sentence of Macer's stands out :

The true figures have now been given  as: -

The full article on Iain Duncan Smith's revised figures can be found HERE .

Mr. Macer, yet again your soapbox has been found to be riddled with woodworm and an unsound platform for your paper's bigotry! 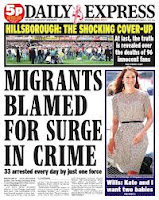