News of the World to admit phone hacking liability

The owner of the News of the World is to admit liability in a number of cases brought against the paper for alleged phone hacking.
News International says it has approached some claimants with an "unreserved apology".
It will also establish a compensation fund, with a view to "dealing with justifiable claims efficiently".

A News of the World reporter and an ex-news editor were arrested earlier this week over the allegations.  BBC NEWS


NEWS INTERNATIONAL'S PHONE-HACKING STATEMENT IN FULL - (thanks for link to Journalism.co.uk)
- - -

@James_Macintyre James Macintyre
But still they key question remains, about the relationship with and payments to the police from Murdoch press.

@KeirSimmonsITV Keir Simmons
News of the World says it has decided to approach some civil litigants in 'phone hacking' cases with 'unreserved apology'. 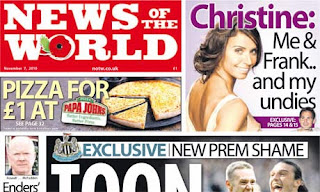 Phone Hacking: NI to Apologise to Victims Including Sienna Miller - Guardian Media
- - -
Apologies for Phone-hacking : News International to Give up the Fight - Politics.co.uk

News International has offered an unreserved apology and an admission of liability over the News of the World phone hacking allegations.

The global media giant said it had also instructed lawyers to set up a compensation scheme for a number of public figures to deal with "justifiable claims".
The company said the announcement follows an "extensive internal investigation" and disclosures through civil legal cases.
In a statement, News International said "past behaviour" at the newspaper in relation to voicemail interception was "a matter of genuine regret".
It added: "This will begin the process of bringing these cases to a fair resolution with damages appropriate to the extent of the intrusion."
But the company said it would continue to contest cases that it believed were without merit.
News of the World, a Sunday tabloid newspaper, is accused of intercepting the voicemail of a number of public figures during 2004 to 2006.
More follows...

@MinorityThought Minority Thought
Compare this News International statement from 2009 (http://bit.ly/f59SZa) with this (http://bbc.in/gPb3tY). What a difference 2 years make.
- - -

The NOTW has now admitted mass criminality. The Gvt should NOT approve Murdoch's bid for BSkyB until all investigations are complete
- - -