"BRITAIN faces a fresh wave of migrants from next Sunday, when rules on benefits are relaxed.


As many as 100,000 people from eastern Europe are expected to head for the UK after May 1, when they will be able to claim up to £250 a week in handouts."
We were due another immigration warning by the Express, that snarling keeper of the nation's gates and borders and inveterate, dogged EU sceptic, and here it is!

You might ask what is so unwarranted about a newspaper delivering a timely warning about the possibility of our benighted welfare system being potentially put under further strain by an influx of foreign migrants from the EU countries? Well, not much if that were all this piece sought to accomplish. 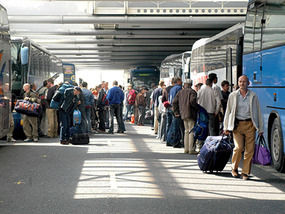 But it is not merely a welcome heads-up. The headline alone suggests that the 'flood' of migrants, salivating at the thought of a generous weekly hand-out of £250, is already underway, threatening to swamp our own impoverished citizens. We see a photo purporting to be:
"Buses arriving at Victoria coach station in London disgorge Polish immigrants seeking work."
Alison Little, the Express' Deputy Political Editor, quotes the Chairman of MigrationWatch UK, Sir Andrew Green:
“This needs to be watched very carefully. Nobody knows what impact it will have.”
(a fine example of 'stating the bloomin' obvious'?)
He is particularly concerned about what would happen once similar “transitional controls” on immigrants from Bulgaria and Romania are lifted in two years’ time, with fears that Roma people would race to take advantage.


Immigrants from eight countries – including Poland and Hungary, which joined the European Union in 2004 – will get automatic rights to Jobseeker’s Allowance, housing and council tax benefit. Rules that prohibit eastern bloc migrants from accepting the handouts unless they have worked here continuously for a year must be lifted to comply with EU requirements.
These worries from MigrationWatch, dubbed by Ms Little: 'a monitoring body' are the latest in a long list of issues taken up by this group over a considerable length of time. A quick glance at the organisation's website Home page gives a flavour of the standpoint held by its members.
However, the tenets of MigrationWatch are not universally respected or admired and I include one newspaper article here as an example of many I found when researching the group.The piece mentions and gives examples of many inaccuracies in MigrationWatch's statistics :
"Perhaps it's to be expected that MigrationWatch might play a bit fast and loose with the evidence -- it is a campaign group, after all. But this seems to be becoming a habit: yesterday it published another report, using an even more flawed methodology, to make very strong claims about immigration and youth unemployment. This was duly picked up by the right-wing media -- the Express today repeats this study's claims under the headline "Migrants rob young Britons of jobs", and the Telegraph goes for "13 per cent rise in Neets 'linked to immigration' ".
Then Ms Little enlists support for her argument from the Conservative MP Mr. Philip Davies,

well known for his fervent and oft voiced wish to see Great Britain leave the EU altogether :
"Conservative MP Philip Davies said it was impossible to say how many more people would come to Britain, but experience suggested numbers would rise."
(again, stating the obvious!)


He added: “Our welfare bill is too expensive supporting people in this country. We can’t afford to subsidise people from the rest of the EU as well.


“It’s another kick in the teeth for taxpayers and another example of why we would be better off out of the EU.


“Experience suggests that we will get the lion’s share of these people, partly because of the generosity of our welfare system. Whatever the reason, it is going to be EU-initiated picking of our pockets.”

Who wouldn't be alarmed at the idea of hundreds of thousands of potential thieves and scroungers scattering around the country uncounted and unaccountable?

There is a valid argument to be had about immigration, especially in these straitened times and discussion is often better informed when enhanced by accurate statistics and good  evidence as in this article by Dr Eoin Clarke in his 'Green Benches' Blog.

Using a sensationalist headline as does Ms Little's article today, serves no purpose other than to reignite public fear and indignation . It isn't yet happening, it may not happen at all.

But if the public can be frightened into believing that it will and that the ensuing disaster was caused by our belonging to the EU, so much the better. After all, as Ms Little candidly admits:


"News of the immigration wave will fuel the Daily Express’s crusade for Britain to quit the EU."
In other words, pick at a scab often enough and the wound never heals. The danger is, as we watch the antics of the EDL in towns and cities around the country, the wound may become infected.... 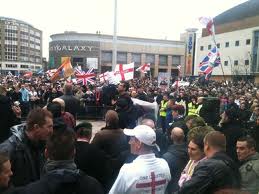