The Cause :
The Effect : 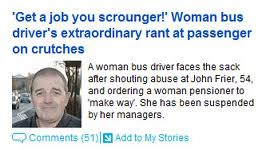 Extract from an article in the Guardian, Saturday 14th may 2011:

Poll shows that attacks have grown worse over last 12 months since controversial benefits reforms were launched"
.............
"Disabled people have faced greater hostility from the public since the government launched its controversial benefits reforms, according to a survey by a leading charity.
A majority said that they experienced hostility, discrimination and even physical attacks from strangers every week and more than a third claimed the position had worsened over the previous 12 months.
Victims blame ministers for portraying all people with disabilities as scroungers as they seek to cut the number of people on the disability living allowance, the benefit now given to 1.9 million people deemed physically unable to work.
The government has presented changes, including the introduction of medical and psychological tests for those claiming the allowance, as a way of getting tough on people who are cheating the system. But Scope, a charity for disabled people, which commissioned the survey, said there was powerful evidence that the "backdrop of negativity" behind the cuts was leading to a rise in hostility and even violence towards some of the most vulnerable in society."

This symbiotic relationship between media and government is leading to deep mistrust and division between sections of our society, enabling smoother passage for potentially very unpopular policies. Ruthlessly clever of them!

A march entitled " The Hardest Hit " took place on Wednesday 11th May 2011. A video and account of the March can be found here. 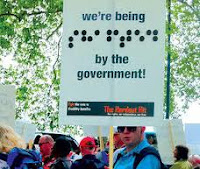 Posted by Rosie Robertson at 16:38