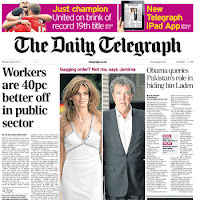 The Telegraph carries an article on its front page today (Monday May 9th 2011), here , obviously intended to heap more fuel on the fire which the right-wing media seem desperate to keep alight, but which annoyingly for them will insist on dying down!

Dampened by credible statistics and up to date evidence, this particular bandwagon decreases in its inflammatory powers the more the press bang on about it.

Especially when the figures quoted are inaccurate and out of date.

The Right-wing think-tank, Policy Exchange, on whose website's 'About Us' page can be found ringing endorsements from a Tory Mp and Ministers (including Michael Gove, George Osborne and Oliver Letwin) , Boris Johnson, the Telegraph and the Times, reassures us that :


"Policy Exchange is an independent, non-partisan educational charity. We work with academics and policy makers from across the political spectrum. We are particularly interested in free market and localist solutions to public policy questions."
'Non-partisan'? Really? The mere fact that those promoting Policy Exchange derive mainly from the right-wing of the political spectrum give doubt to this claim!

"Workers in the public sector are more than 40pc better off

Public sector workers receive more than 40 per cent extra in pay and pensions than their counterparts in private companies as state wages spiral, a report has found."

This is the headline above the article written by the Telegraph's Social Affairs Editor, Tim Ross.

A good example of the flawed statistics and their misuse by Policy Exchange is in this paragraph:

These are the revised pay scales for main scale teachers in England as from September 2010 published by the TES: (Full details: here )


Even with the 2.1 percent rise, very few mainscale teachers will achieve the dizzying heights of remuneration they are accused of enjoying by Policy Exchange !

The article continues by reporting the findings of Policy Exchange unquestioningly and at length with no sign of balance - until the end when Dave Prentis of Unison is quoted :

Unions dismissed the study as an attempt by a Right–wing think–tank to "stir up divisions" between public and private sector workers.


Dave Prentis, leader of the Unison union, said: "The data used is out of date and does not reflect the true picture and it does not compare like with like. It should be taken with a huge barrel of salt."


Brendan Barber, the general secretary of the TUC, said: "Public sector workers are facing a pay freeze, job losses and have already seen the value of their pensions cut by 25 per cent."

There's a tendency nowadays for statistics and facts to be selected for print according to their usefulness in duping a gullible public by the Government, aided and abetted by a largely right-wing press. Why be accurate when you can fool readers and mould opinion by feeding them duff information? Why check the facts when your purpose is best served by simply printing what the source has given you?

These articles are designed to inflame jealousy between one set of workers and another. They use misrepresentation and data abuse to create division:

"Neil O'Brien, the director of Policy Exchange, said it was unfair that private sector workers should "make all the sacrifices". "Public sector pay has got hugely out of control," he said. "We need a much better–balanced system of public pay, with organisations like the NHS and schools given greater freedom to vary pay so they can attract staff but also get value for the taxpayer."

Posted by Rosie Robertson at 10:18