Fresh allegations in phone hacking case: will the Met now widen its remit?

"News Corporation has shaped global media by ensuring the public's needs are met and that our offerings are of the highest calibre. Today, hundreds of millions of people around the world trust us for the best quality and choice in news, sports and entertainment. This public trust is our Company's most valuable asset: one earned every day through our scrupulous adherence to the principles of integrity and fair dealing."
Extract from Rupert Murdoch's letter to News Corp staff introducing the company's 'Standards of Business Conduct'.

A BBC recording of his question and David Cameron's reply can be found here. 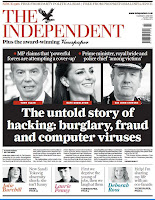 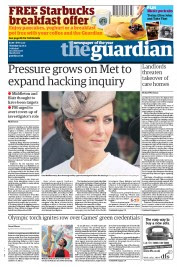 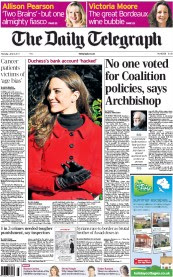 
Kate Middleton and Tony Blair 'Phone-hacking Victims' Claims MP - Mirror
MP Makes Phone-hacking Claim - FT (registration required)
Kate Middleton and Tony Blair ' May Have Been Victims of News International hacking Scandal' Mail Online
On the BBC Radio 4's World at One with Martha Kearney, the latest developments in the case can be heard in an IPlayer recording at approximately 16minutes 16 seconds  here.
An article on the Sky News website mentions the new allegations by Tom Watson and has a video clip, here.
Most of these sources report that News Corp have denied there is any truth in what was revealed by Tom Watson yesterday in the House of Commons:
"A spokesman for News International, the News of the World’s parent company, said: “It is well documented that Jonathan Rees and Southern Investigations worked for a whole variety of newspaper groups. “With regards to Tom Watson’s specific allegations, we believe these are wholly inaccurate. The Met Police, with whom we are co-operating fully in Operation Weeting, have not asked us for any information regarding Jonathan Rees.
“Tom Watson MP made these allegations under parliamentary privilege.”- Telegraph.

The Metropolitan Police spokesman said yesterday, as reported in the Guardian:

"[We] can confirm that since January 2011 the MPS [Metropolitan police service] has received a number of allegations regarding breach of privacy which fall outside the remit of Operation Weeting. These allegations are currently being considered."

As these new allegations and slivers of information emerge, it becomes increasingly obvious that phone-hacking and the News of the World may be the tip of an enormous iceberg, involving many more journalists, criminals, newspapers and methods of intercepting information.

We are watching, perhaps, the denouement of a murky plot with far-reaching and dramatic consequences.


Will we eventually witness the disappearance of not only criminal methods of news gathering but of the equally harmful character assassinations in the name of the 'public interest' such as this, reported today?:

By Dominic Ponsford
A social worker targeted by The Sun in its Justice for Baby P campaign has received an apology and substantial damages.

Yet another apology wrung from the News Corp stable of titles, this time by the Press Complaints Commission.


Many, many more links and lots of information regarding the phone-hacking saga and Rupert Murdoch and those close to him can be found if you click the relevant tab above this blogpost.
Many, many more will, no doubt, be added in the future..!

Tonight, writing in the Guardian, Tom Watson has made an impassioned plea for those Labour MPs, Shadow Ministers, who were also victims of the News of the World hackers to come forward and 'speak out'.

"Yet it's not just the Conservative prime minister who could do with a spine replacement. It's the former Labour ministers who were allegedly hacked by News International's private investigators who have made secret, out of court settlements with the company. I want to be clear to my parliamentary colleagues (in the Lords and Commons): if you were the target of a News International private investigator you have a democratic duty to speak out. You owe it to yourselves to put an end to a toxic media culture that allows journalists to think it acceptable to hack the phones of the families of murder victims."

If these people were to publicly denounce the practices employed by the editors, journalists, hackers, newspaper proprietors etc, they would not only be helping those mentioned by Tom Watson in his article, - they would be helping to restore to health the democracy of this country.

They owe it to us, the ordinary people, who need honest, principled reporting and unmanipulated facts to enable us to make decisions as to who represent us in Parliament.

I add my plea to that of Tom Watson.
Posted by Rosie Robertson at 15:52