LEVESON INQUIRY:CULTURE, PRACTICE AND ETHICS OF THE PRESS

"I want this inquiry to mean something", not end up as "footnote in some professor of journalism's analysis of 21 century history." LJ Leveson in reply to A Rusbridger's submission to Inquiry. 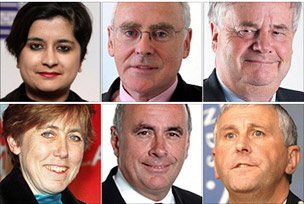 
The proceedings are shown here live on the Leveson Inquiry website.

Videos of Each Hearing on Official Leveson Inquiry Website

Leveson Inquiry - Evidence, Weeks 1 and 2 - a Crash Course on the Ways of the Tabloids - Inforrm's Blog

What do You Do When an Entire System Fails? - David Allen Green for New Statesman

Mosley Hatches a Plan to Make the Papers Pay - Independent

I've Seen the Future and It's Crap, Michael Williams - BJR


"Chris Atkins is a London-based film-maker. He has worked as a producer on three films for writer-director Richard Jobson (Sixteen Years of Alcohol, Sixteen Years and A Woman in Winter) and wrote and directed the low-budget feature Feedback, which premiered at the Edinburgh film festival. His lastest film, Taking Liberties, is a political documentary about the erosion of civil liberties under the Blair government."

Guardian Live Blog of Chris Atkins' Evidence - to be without video or audio feed, although journalists allowed into Inquiry room

@Selkie T Portilho-Shrimpton
CA: Guardian helped with release of the film and Channel 4 bought the rights for TV. No one else wanted to know about it #leveson
Fuel to the Fire - Article by Atkins on 'Churnalism' - via Media Standards Trust

"One of the stories that Atkins and his collaborator Jen got into the papers was: "Sarah Harding was secretly a fan of quantum physics".
It ran as a lead story in Grant Smart's Bizarre column in the Sun complete with a fake quote.
The Sun object to this and have asked the Leveson inquiry to challenge this. They say they ran Sarah Harding's PR who gave them the quote.
Atkins says he finds this "a remarkable coincidence" as the Sun did not challenge this claim about the fake quote since the movies came out two years ago."

"The Leveson inquiry has resumed, but there is no video or audio streaming for legal reasons. Thais Portilho-Shrimpton of the Hacked Off campaign has tweeted this:

Chris Atkins' face was not to be shown, but one barrister is arguing his image is easily obtainable online!"

@hackinginquiry Hacked off
CA: although the PCC system ineffective, inquiry should not use Ofcom as example of regulator either #leveson


David Leigh
"The Guardian's investigations editor, David Leigh, was described by his colleague Nick Davies at the Leveson inquiry as an "artful dodger" journalist who knows how to stay on the right side of the law and the public interest. Leigh has won plaudits for his work that led to the jailing for perjury of Tory defence minister Jonathan Aitken in 1995 and an investigation into secret payments by arms giant BAE. Leigh more recently led the Guardian's collaboration with Julian Assange and the release of redacted US diplomatic cables."

Guardian Journalist Justifies Hacking if in the Public Interest - Guardian

"Leigh tells how Guardian journalists operate under two codes of practice, the PCC's and the Guardian's. Leigh says telling lies or misleading stories about your sources is "just wrong, it's misleading the reader about what's going on"."

@IndexLeveson IndexLeveson
Leigh: I don't want to sound holier than thou, but culture (Guardian & other broadsheets) is pretty candid, ethical, serious-minded #leveson

@nataliepeck Natalie Peck
DL: I wasn't involved in blagging info from J Aitkin. Wasn't working for the Guardian at that time (was at World in Action). #Leveson

@LyraMcKee Lyra McKee
Wow. @davidleigh3 said while papers like the Gdn can self-regulate well, tabloids are "incapable" of it #leveson


"My name is Steven Nott and below is an article from the South Wales Argus dated 13th October 1999 which shows how I tried to raise the alarm to the British authorites about the possible interception of voicemail otherwise known as phone hacking. The article came out after a long campaign to make everyone aware of the insecure Voicemail system on the Vodafone Recall service. Because of Vodafone's lack of care towards customer safety, I took my story to the Daily Mirror, when Piers Morgan was Editor, to name and shame them.

Things didn't go quite to plan because Oonagh Blackman at the Mirror, after much excitement, decided not to print the story even though she said it was going to be the biggest that decade so after being warned by her not to tell anyone, I went to their rival newspaper The Sun, in Wapping at the News International HQ and asked for help to expose Vodafone security issue and the Daily Mirror.

It was a catastrophic decision to show the newspapers about phone hacking but the public needed warning. I didn't know if they knew or not at the time. I definitely have a good idea what's been going on now though.

I also informed New Scotland Yard, Security Services, Home Office, The DTI and my MP about my concerns and never had any help from them.

Please also bear in mind when reading this, I was trying to raise the alarm to the serious implications about voicemail interception back then and if Vodafone hadn't tried to wriggle out of it saying 'change your PIN' every time, then perhaps we wouldn't be where we are today.

What would you do if you discovered a security risk that was a national threat ? I didn't know what I had got myself into and was relentlessly trying to rectify my mistake of telling the tabloids. A remarkable story, mere coincidence or massive cover up ? Leveson Justice Leveson will decide."

@davidallengreen David Allen Green
It seems @StevenNott warned tabloid media about hacking all along, but no one ran with the story. Strange that. #Leveson


"Ms Harris represents football agent Sky Andrew and has represented actress Leslie Ash and her husband, former footballer Lee Chapman.
Mr Andrew is one of almost 50 alleged victims of media malpractice who have been granted the right to be "core participants" in the judicial inquiry into phone hacking, due to start on 14 November."

Live Blog from Guardian with details of Charlotte Harris' evidence.

From the Guardian Live Blog:

"One of the issues with the Press Complaints Commission, says Harris is, that you can't have concurrent complaints to the PCC and civil legal action."

@IndexLeveson IndexLeveson
Harris: there has to be certain amount of personal autonomy & freedom to be, w/out fear you're going to be a role model in future #leveson

From the Guardian Live Blog:


"Harris says she is reluctant to make too specific a recommendation regarding future regulation of the press, but that the first base of her Mishcon de Reya is the law should be obeyed. She advocates "proper sanctions" for newspapers.


When it comes to regulation going forward, there's a certain reluctance...nobody wants a bureaucratic, kneejerk reaction to some the terrible things we've heard.
I know that I want the law to be obeyed in some way, so we don't have this ridiculous situation with the injunctions that it was okay to breach them...but if there's a phone hacking scandal that can be silenced for years."

Posted by Rosie Robertson at 00:53