Proof that Journalism Not a 'Feather-bedded' Profession? 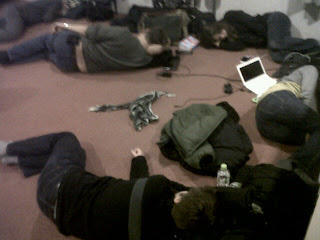 An image sent from Japan, by Alex Thomson of Channel 4 News, showing journalists taking a well-earned rest from their coverage of the aftermath of Japan's earthquake, tsunami and nuclear problems.

@hiroko_nakamura okorih arumakan
I want to thank @channel4news crews for delivering water to the evacuators instead of just going for the report. Amazing team.
It is sometimes all too easy to criticise the media and to forget that in order for us, the public, to be given a true portrayal of events and issues, the news gatherers, not least recently, find themselves in precarious positions.
We have seen remarkable scenes, accompanied by careful and thoughtful words, delivered to our computers, TVs and in the press, from the Middle East, New Zealand and Australia. This is true for most of those sending back film and written reports from Japan.
Channel 4 News are not alone in the excellence of their work. The BBC News output, together with the majority of that of Sky News has at times brought unique angles and surprising points of view to us here in Britain from places beleaguered by natural disasters or the violence of tyrants meted out to citizens embroiled in their struggle for democracy.
One has only to glance at the front pages of the press, however, and to read some of the articles offered to their readers, to glean that the journalism and coverage of such momentous events is not always of such commendable quality. For example: