" I swear by Almighty God that the evidence..will be..nothing but the truth." Really, Rupert Murdoch?

From the Guardian:
Highlights of Rupert Murdoch's first day of evidence before the Leveson inquiry. The News Corp chief denied using his newspapers to influence government to treat him favourably, that commercial interests were not a factor in political party preference, and that he never asked a British prime minister for anything. :-

From the Guardian:-
Giving evidence to the Leveson inquiry into press standards on Monday, the former Labour prime minister Gordon Brown denies making a threatening phone call to Rupert Murdoch, who told the inquiry Brown vowed to 'destroy' him, after the Sun switched its political support from Labour to the Conservatives in 2009
Following Gordon Brown's testimony ( see #pressreform 's page for this HERE ), the usual suspects of the press herd had a field day and printed articles reminiscent of those which smeared and defamed Gordon Brown during almost the whole of his three years in office.
Prominently bristling in their armoury of barbs, was the suggestion that Rupert Murdoch must be telling the truth because Gordon Brown wasn't to be believed when he denied declaring 'war'. Demands were strident for Gordon Brown to prove his innocence by producing Cabinet Office details of any phone-calls he had with 'Honest - Joe' Murdoch. 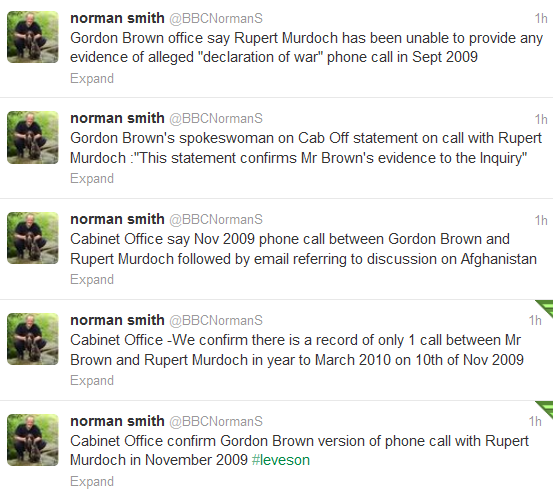 Shortly afterwards this appeared on the BBC News website:

Gordon Brown says records released by the Cabinet Office confirm his claim that he did not call Rupert Murdoch to declare "war" on News Corp.
Mr Murdoch told the Leveson Inquiry that the then prime minister made an angry call to him in September 2009 after the Sun dropped Labour.
But the Cabinet Office said there was no record of a call that month.
The two men did speak to each other on the phone the following month about Afghanistan, it added.
Mr Murdoch told the Leveson Inquiry into press standards that Mr Brown had phoned him after the Sun switched its backing to the Conservatives.
'One call' He quoted Mr Brown as saying: "Well, your company has declared war on my government and we have no alternative but to make war on your company."
Mr Murdoch further claimed that Mr Brown had not been in a "balanced state of mind" when he made the phone call.
Mr Brown has categorically denied that such a call took place. Quizzed about it at the inquiry on Monday, he said: "This conversation never took place."
The former prime minister added: "I'm shocked and surprised that it should be suggested, even when there's no evidence of such a conversation, that it should have happened."
News Corp issued a statement to say Mr Murdoch stood by his version of events.
But the Cabinet Office has now released a statement which Mr Brown says confirms his evidence to Leveson.
It says: "Following Gordon Brown's evidence to the Leveson Inquiry on Monday we have received a number of questions about our records, which we provided to Mr Brown to support his preparations for the inquiry.
"We can confirm that there is a record of only one call between Mr Brown and Rupert Murdoch in the year to March 2010.
"That call took place on the 10th of November 2009.
"This was followed up by an email from Gordon Brown to Rupert Murdoch on the same day referring to the earlier conversation on Afghanistan.
"Four witness statements have been submitted to the inquiry on the content of the call by staff who worked in No 10 Downing Street and who were the four and sole personnel on the phone call."

Later, from the Guardian:
I wonder how many other News outlets will publicise this update on the Gordon Brown v Rupert Murdoch saga?
Telegraph? Mail Online? NI papers?

Posted by Rosie Robertson at 14:14