The workman (Murdoch) blaming his tools?

This screen capture is a sample of tweets which appeared in Rupert Murdoch's timeline today: 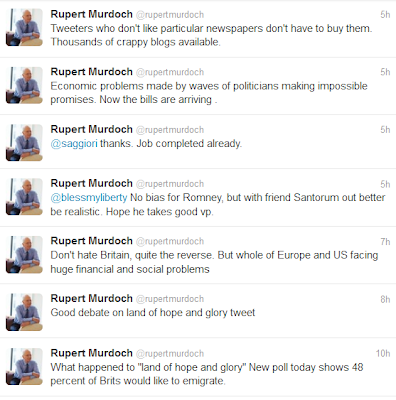 He wistfully asks "What happened to 'land of hope and glory' New poll today shows 48 percent of Brits would like to emigrate."

Is it possible that these headlines, redolent with hyperbole, cant and inaccuracy, may have added to the malaise the poll in the Sunday Sun seems to have unveiled in this country? How much has the owner of these papers influenced the daily diet of their readership?

"Tweeters who don't like particular newspapers don't have to buy them" - perhaps not, but we do all have to live with the consequences of ideological political decisions supported by a public deprived of balanced, honest reporting. We are all affected by having choice diminished by the suppression of vital information and accurate facts.

"Thousands of crappy blogs available." - More hyperbole here, Mr Murdoch! Most of us are able to rely on trusted blogs for truth and accuracy and to expose those facts otherwise denied to us by some of the press! A prime example of a such a blog is: Jack of Kent belonging to David Allen Green who did much to expose the Nightjack 'outing' by email hacking carried out on behalf of The Times, and another: Zelo Street belonging to Tim Fenton. Both would prove rather uncomfortable reading for someone in Rupert Murdoch's position, but neither would be described as 'crappy' by most people. There are many other such admirable, newsy, investigative blogs to be found.
Posted by Rosie Robertson at 01:40