Last week at the Leveson Inquiry, we were asked to suspend all disbelief and to accept Rupert Murdoch's assurance that he never uses his papers to promote his business interests. Never. He simply doesn't do business like that, apparently. Ever.

Unfortunately, my pesky curiosity had been piqued some months ago by something I read on a U.S. blog:-

The name Joel Klein rang a bell. When Rupert and James Murdoch appeared together last year to be questioned by the DCMS Select Committee, a figure seated almost directly behind them caught my attention:- 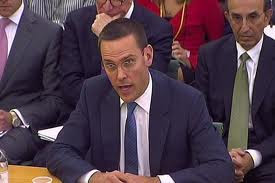 He sat impassively throughout the whole proceedings, barely blinking, yet strangely tense. It turns out that he, Joel Klein, had been appointed in 2010 as a 'fixer' by News Corp to deal with the turmoil resulting from the phone-hacking scandal.
Obviously a man very close to Rupert Murdoch, he was also present at the Leveson Inquiry this week, seated with Wendi and Lachlan Murdoch in the courtroom.

( More information on Joel Klein HERE )
During his testimony, Rupert Murdoch was asked by Mr Jay (taken from official transcript):-

Mr Jay: Fair enough. May I ask you about Mr Gove. Is he a politician who is close to you?

Rupert Murdoch: No, I wish he was. He was - I don't say that any other than to say that he worked with me, had a very distinguished career at the Times for a long time. I might have met him very occasionally then, walking through the Times. I think he and his wife, who is also a distinguished journalist there, they've come to dinner once the last two or three years, that's with his wife. The I think there was another occasion when Mr Joel Klein was with me and he came over because he was to do a conference with Mr Gove on education. That was -- he was invited when he was -- long before he joined me. when he was chancellor of the New York City school system. And there might have been another one. I like to get a few people around me of interest and different, from different fields, not just politicians.

During his testimony to the Leveson Inquiry, Rupert Murdoch repeatedly denied that he had any influence over his editors or journalists. He contradicted himself later when he said, flatly denying that he was able to shape the policies of governments,: 'If you want to judge my thinking, look at the Sun.'
Let's look at Mr Murdoch's thinking on education through the eyes of a Sun reader (if you're a teacher reading this blogpiece, you may wish to don a hardhat and book a precautionary course of anger-management sessions..):-

These articles offer no real investigative journalism. They are full of exaggeration and skewed facts and on the whole do not represent a fair, balanced appraisal of the British education system. They are 'knocking copy', intended to prime the public, to bring about a belief that our education system is rotten and needs a complete, radical overhaul.
The pieces contain the same message as the one contained in a diatribe speech from Rupert Murdoch during his appearance at the Leveson Inquiry, when we were treated to his views on the prognosis and cure for our ailing schools and society - exactly the same message, too, as that of Joel Klein in his efforts in the U.S. to clean up their defective education system! 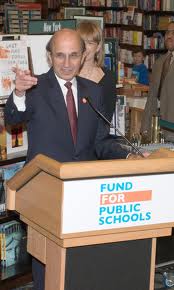 Below is a very telling and acerbic animation made in the U.S:-

Joel Klein Meets Joel Klein to Discuss Rupert Murdoch No Bid Contract to Wireless Generation - Youtube
Just one example highlighting how Klein's approach has a similar ring about it to those of Murdoch and his megaphone, the Sun:-
Joel Klein Compares Teachers to Murderers - Good Education 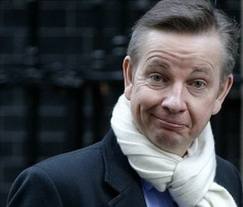 Michael Gove allegedly employs extremely secretive methods when planning and discussing his policies for British education with those close to him, instead of using official email and communications outlets:-

This, despite assurances that this government would be the most transparent and accountable ever! One wonders just what is being hidden - and why...
Rupert Murdoch owns Harper Collins which publishes, amongst other genres, text-books for schools. Could this be at least part of the reason?

I, for one, heard nothing from Rupert Murdoch last week during his two-day 'grilling' which would give me reason to believe his motives are in any way altruistic. Least of all in the realm of education.

Update - It would appear that when Gove met Murdoch and Klein at a site in London Docklands to discuss a possible 'News International Academy' or Free School, Boris Johnson was also in attendance.....as this article which appeared on the BBC Website today shows: - BBC News - London Mayor Boris Johnson in 'News International Links' - Video
Posted by Rosie Robertson at 12:36