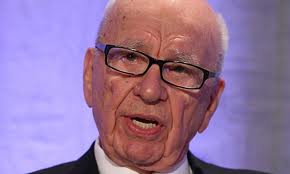 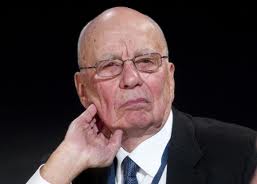 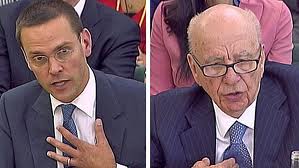 LJ Leveson begins with a warning to the court and those outside that evidence given and made public can be 'ambiguous'. (reference to Jeremy Hunt/BSkyB evidence provided by James Murdoch yesterday , emails) 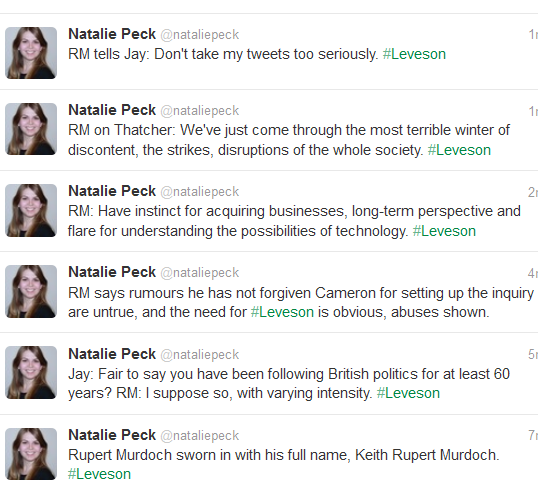 
Robert Jay, counsel to the inquiry, says that approximately 8% of News Corp's revenue is generated in the UK.
Rupert Murdoch says he has been following British politics "with various intensity" for many decades. He says it is "untrue" that he wants to punish David Cameron for setting up the Leveson inquiry.
Murdoch says:


The need is obvious. There has been some abuses shown. I would say there are many other abuses but we can go to that in time. The state of media in this country is of vital interest to its citizens. I welcome the opportunity because I wanted to put certain myths to bed.

He adds that the issues "go further" than phone hacking.

@nataliepeck:
Jay asking RM about a lunch at Chequers with Thatcher, in Jan 1981.

@arusbridger:
"i asked Mrs Thatcher, could I see her. She said 'why don't you come to lunch?' I thought it was q appropriate

@zelo_street:
Jay getting Rupe in an agreeable and relaxed mood. Unlikely to get him any more interesting answers though

@nataliepeck:
Minutes: Main purpose of Mr Murdoch's visit was to brief the Prime Minister on his bid for Times Newspapers.

@arusbridger:
Murdoch: "I didn't have the will to crush the unions. I might have had the desire...but that took several years"

@GreensladeR
Murdoch at #Leveson: wasn't worried that my Times bid might have been referred to monopolies and mergers commission

Murdoch is asked about the bidding process for the Times and Sunday Times in 1981.
Like his appearance before MPs last year, early indications are that Murdoch's evidence will be punctuated by (occassionally very) long pauses.
Murdoch met Margaret Thatcher for a lunch on 4 January 1981, Jay says. Murdoch doesn't recall the details of the lunch, but maintains that the meeting was "quite appropriate" because it concerned the possible takeover of a "great economic asset".

Jay asks: "President elect Reagan, Baroness Thatcher and you were all on the same page politically weren't you?"
Murdoch: "I guess that's true."
Was part of that meeting to demonstrate how much you were "one of us" to use Mrs Thatcher's term? "No," says Murdoch.
Asked why it was important for Thatcher to have a meeting with him about the possible takeover, Murdoch says it was "perfectly right that she should know what was at stake".
Wasn't the meeting all about the trade unions, asks Jay?
Murdoch: "I didn't have the will to crush the unions, I might have had the desire but that took several years."


It had a great position on Sunday but its economics and staff were all intertwined together with the Times, which resulted in a big net loss.

Jay suggests he wouldn't have been so "cack-handed" to have asked outright for favours.
He says he has never asked a prime minister for anything, including Thatcher. He says that notes by Bernard Ingham will confirm this. "I hope they will be put on the web," he adds.
Murdoch says he was "a little slow in writing to thank her" for the lunch.

@arusbridger:
#Murdoch I've never asked a prime minister for anything. Jay suggests it's more subtle than that #Leveson

@IndexLeveson:
Rmurdoch: "I take a particularly strong pride that we have never pushed our commercial interests in our newspapers."

@GreensladeR:
Murdoch at #Leveson: our editors have generally been long-serving! But News of World had 12 editors in 27 years

@nataliepeck:
RM says he runs he company with a "great deal of decentralisaiton" and "I don't think I have any aura".
RM: I think the Sun has never been a better paper than it is today. I couldn't say the same for my competitors.
RM denies main aim was to improve commercial appeal of the Sun and NoW. Says was always to tell the truth. 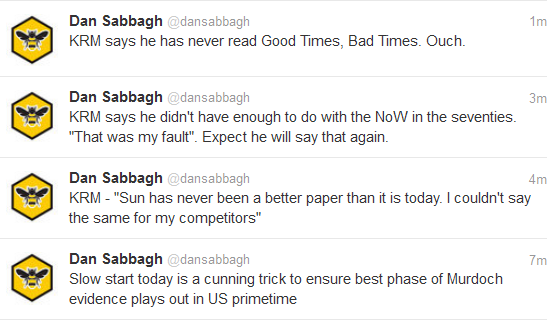 @IndexLeveson:
RMurdoch: I have great respect for the British public and I try to carry that through

@nataliepeck:
RM: Only remember talking to Mr Evans about policy once. Asked me to tell him what I wanted him to say. Said "that's not my job".
RM statement: First met David Cameron at a family picnic...No politics were discussed, as we were overrun with children.
RM statement: I would certainly welcome it if these meetings [with politicians] were listed on some public schedule.

@tabloidwatch:
Murdoch at #leveson: "we have never pushed our commercial interests in our newspapers". Really? http://t.co/jT9bPyAL

@arusbridger:
RM on publishing the fake Hitler diaries: "It was a major mistake, one I'll hv to live w for the rest of my life"
Murdoch gave Kelvin McK a "hell of a bollocking" for "The Sun wot won it." headline "It was tasteless & wrong"
Murdoch: "I love newspapers. My shareholders would like me to get rid of them all"

@DrEvanHarris:
The point Mr #Murdoch is that the "Internet" does not describe itself as a "family newspaper" and does not tell the PM what to do
So now #Murdoch denies Thatcher - we weren't the only paper supporting her. The Telegraph and Mail did

@skymarkwhite:
Recalling the Sun headline re Kinnock as a lightbulb, Murdoch says: I thought that was absolutely brilliant
Murdoch: I go to an election every day Mr Jay.. people can stop buying my newspapers. Sometimes they do!"

@DemocracyFail:
Murdoch has been facing this criticism for decades. He is well versed in his responses

@nataliepeck:
Jay moves on to the Sky/BSB merger in 1990.
RM statement: No one promised NI anything in order to induce executives or Editors to support the Conservative Party [in 2010].
RM: I think we're [the Sun] perhaps the only independent newspaper in the business.

@JoshHalliday:
Rupert Murdoch witness stmnt: Tony Blair phoned me [not other way round] three times in run-up to Iraq war in March 2003

@GreensladeR:
Murdoch at #Leveson: agrees that gave Kelvin MacKenzie a bollocking for his It woz the Sun wot won it headline in 1992

@Kevin_Maguire:
Hacks giggle #leveson press gallery when Murdoch says of Sun: "We are perhaps the only independent newspaper in the business."
As Cam was saying parties did too much "cosying up" to Murdoch, across town at #leveson Rupert was saying he didn't. Hmmm...

@rosschawkins:
Murdoch #Leveson : never let my commercial interests enter into consideration in elections
Murdoch ws says notw closed because "credibility of the brand with readers was irretrievably destroyed"
Murdoch taps desk as he says - I never asked Mr Blair for anything, nor did I receive any favours

@arusbridger:
Did Blair tell you media ownership rules wd not be onerous under Labour? Murdoch: "I don't remember"
Jay: did you say you liked Blair "but we're not letting our pants down just yet" Murdoch [chuckles]:"I might have"

@nataliepeck:
RM: I think we all like to back a winning racehorse…you like to be on the winning side, but no, that was not a motivation.

@IndexLeveson:
RM: You are making inferences. I never asked Mr Blair for anything, and neither did I receive anything 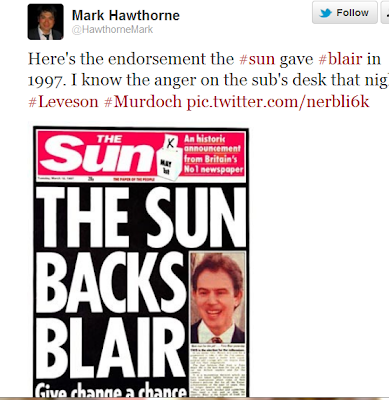 @benfenton:
Bakc at #leveson, Jay is asking whether #murdoch asked Blair to intercede attempt to buy Mediaset from Berlusconi.
Patten has sent #leveson info on HarperCollins refusing to publish his book on China. Murdoch says it is "half-right"
Discussed change of support to Tories in 09 with James M and Rebekah. And probably others. Didn't know if Brown was going to lose.

@nataliepeck:
Jay asks about Lord Patten evidence, over his HK book being pulled by Harper Collins (owned by Murdoch). RM says half-true.
RM: Brown knew we hadn't hacked into his private medical record but obtained info on son's health from another father in hospital.

@rosschawkins:
Later got permission from Chinese authorities for cable tv channel, but stresses smallness of operation

@iankatz;
Rupert Murdoch admits he did kill Chris Patten book, but only because he was "a bad governor of HK" not to protect China interests

@arusbridger:
Murdoch "if any politican wanted my opinoin on matters they only had to read the editorials in the Sun"
Murdoch: Brown wrote personal letter to Rebekah B thanking her for sensitive handling of story re son's illness


Former advisor to Brown, Damian McBride has tweeted the following:

2. Rebekah only contacted Sarah AFTER we told The Sun that we intended to issue a statement to PA, thus spoiling their 'exclusive'.
— Damian McBride (@DPMcBride) April 25, 2012

3. Although the hacking allegation turned out to be wrong, GB 100% believed it. He didn't "know very well" where the story really came from.
— Damian McBride (@DPMcBride) April 25, 2012

@IndexLeveson:
Re phonecall between himself & GBrown around 30 Sept '09. RM told Brown "we will support a change of govt when there’s an election


Murdoch said Brown later made a "totally outrageous statement which he had to know was wrong and he called us a criminal organisation".
Murdoch adds:
"He said that we had hacked into his personal medical records when knew very well how the Sun had found out about his son which was very sad".
Murdoch said the Sun had found out about the condition of Brown's son from a "father from the hospital in a similar position" who called the paper.
Murdoch said: "Mrs Brooks immediately snatched it from the news list and she called Mrs Brown and said 'look, this is going to be out there we should be careful how would you like it handled?'
"I don't know if it was one or several days later we published the story and four or five days later Mr Brown wrote a personal letter to Mrs Brooks thanking her for her sensitivity in the way she handled the story. I believe that letter's in the hands of the police."

@benfenton:
[There was shock in the press room when Rupert used the word "retarded" to describe Ivan Cameron. Is that a generational thing?]

@Peston:
Murdoch impressed with Cameron's kindness to children at family picnic at his daughter's #leveson
Murdoch: backdoor to 10 Downing St is "a short cut to my appartment"

@iankatz1000:
Rupert: If we endorsed people who were helpful to our business interests, it would always be the Tories

@arusbridger:
Murdoch discussed BBC with several PMs: "They all hated the BBC and they all gave them whatever they wanted"
Murdoch: "I was as surprised as anyone when Cameron hired Coulson"
Murdoch: A complete myth I use power of Sun to get favourable treatment. Only Guardian and Independent believe it
After election Cam had Murdoch to tea to thank him for support. "Mr Coulson was present." Then launches Sky bid

Ben Bradshaw MP:
Murdoch says he opposed Labour's policy to save regional ITV news - funny that - it was one of first policies Cameron/Hunt ditched

@rosschawkins:
Murdoch can't recall whether he met Cameron on his own boat or his daughter's

@KeirSimmonsITV:
Murdoch describes flying Cameron to Santorini in Aug 2008 on his 'son in law's plane' to meet on his 'daughters boat'

@adavies4:
Murdoch: let me be q honest Mr Jay, I enjoy meeting our leaders, some more than others...
Jay: let's deal with topic of Alex Salmond... [murdoch smiles broadly]

@IndexLeveson:
Jay: Was there no link in your mind between support for Mr Cameron and BSkyB bid? RM: None at all

@JoshHalliday:
Rupert Murdoch on Cameron hiring Coulson: “I was just as surprised as everybody else”

@afneil:
Clear to me that during Salmond-Murdoch summit Rupe indicated if corporation tax 10% in indie Scotland he could move BSkyB north. Could.

Posted by Rosie Robertson at 00:41