Addressing the nine men and three women on the jury, Mr Edis told them that among their tasks was to decide: “If there was phone hacking – who knew?” Mr Edis said they needed to consider whether Mrs Brooks and Mr Coulson, the editors of the NOTW from 2000 to 2006 when phone-hacking took place, must have known how stories on their papers were being obtained.

Overnight links to media reports as to what was said in court yesterday:
From Nick Davies' Report: 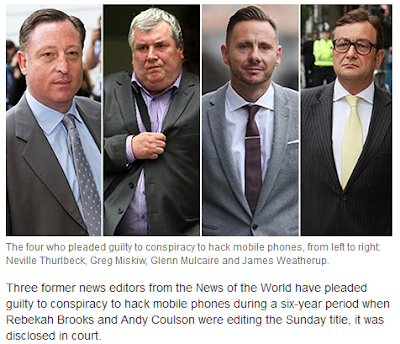 Some cautionary words to those following the live-tweets of the phone-hacking trial from an experienced lawyer:

Latest links to reporting of this morning's continued prosecution case statement:
From the Guardian report above:


Edis continued: "It is the prosecution case [that] a contract like that involves senior management, in this case the editor, the deputy editor and the managing editor," in reference to three of the defendants on trial for an alleged conspiracy to hack phones – Rebekah Brooks, Andy Coulson (who was initially her deputy) and Stuart Kuttner respectively.

Posted by Rosie Robertson at 00:59